It’s been a while since I posted a Cooper “Coop” Tippett update, and even longer since I’ve done a “no coincidences” post. So how about a two for one?!

First off, Coop is progressing really well and is continuing on his road to recovery! His activity is still limited, but he’s walking and getting stronger every day. All great news!

Now the no coincidences part. I played a little golf today with a group of good friends and at the end the round we were met by Coop and his family. Backing up to last week in Humboldt I received a golf towel from Scott Thomas, the father of Evan Thomas. Evan sadly passed In the Humboldt bus crash and each year Scott honors his son at the Broncos annual golf tourney on the 17th hole, Evan’s number. This morning I decided to put Evan’s golf towel on my bag and shared his story several times during the day. When I saw Coop we talked about his surgery and followed that up by asking “how many screws did they put in?” Christine, Coop’s mom, responded, “17, would you like see the x-ray?” I was pretty floored and figured it was obvious I needed to tell Evan’s story to Coop and give him the Evan towel. I later learned that Coop was 17 days post surgery! When I relayed the story to Scott in Canada he said, “that story made us all cry”.

The “no coincidences” piece isn’t going to bring a tremendous young man back, but it does provide comfort to those that were closest to him. As I shared with Scott, “Evan’s spirit lives on, even in Colorado!”

Thank you Scott, thank you Coop, and thank you Evan. 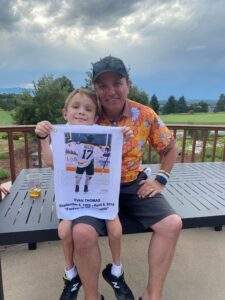