Giving Back to Bob Wolff 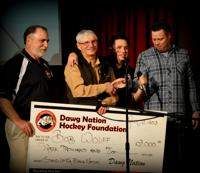 Bob began his hockey career just two years ago. He is 62 years old and always wanted to play, but he never had the opportunity. Then the desire to begin playing surfaced again, after watching his novice son Jeff play hockey for the first time. Bob discovered that most of the players on the ice were just getting started, and finally took the leap. He joined the novice team called NHLPA that has played at the Ice Ranch in Littleton, CO since 2011. Bob’s teammates are thrilled to share the experience with this true sportsman. His skill and knowledge of the game improves every time he steps on the ice.

Bob is passionate about playing, and very rarely misses a contest. However, after having severe head pain after a game, he was rushed to the ER, where the doctors discovered a blood clot that required emergency surgery. The tricky procedure went well, and as soon as the doctors give him the green light, we know Bob will be back on the ice.

Even with insurance, there are always medical bills that come with any operation. That’s where Bob’s friends at DAWG Nation come in. With the support of Comedy Works, under the leadership of Mike Raftery, DNHF was excited to make Bob Wolf our 17th recipient.