Giving Back to Tony Cozza 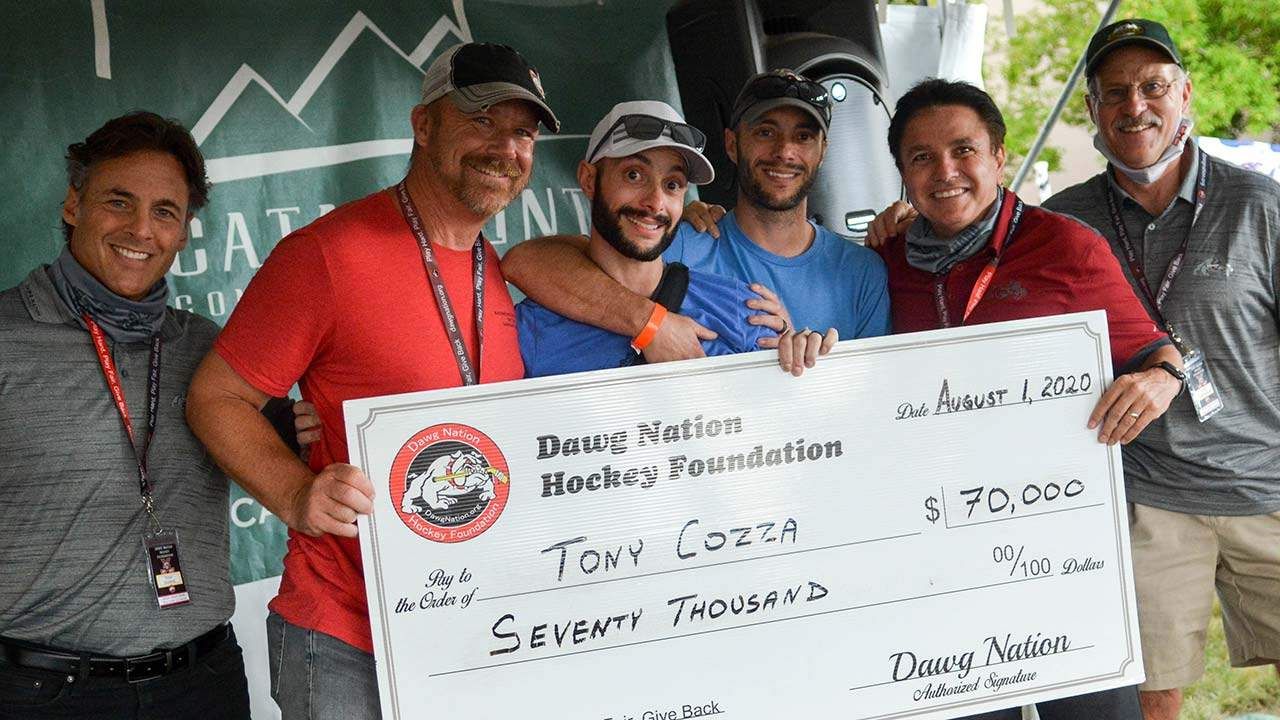 An Outpouring of Support

Tony and his wife Jenna were surprised with the outpouring of support, both in financial contributions, prayers, and good wishes.  Our event, our captains and teams, along with Tony and Jenna’s friends and family were key in raising $70,000 to defray the costs of mounting medical bills.  Tony was joined by his brother Michael and his wife Jenna for the check presentation.  Tony and fellow recipient Dave Carr were surprised by the similarities of their situations and the amount of love and support they were surrounded with in their time of need.  Tony is recovering well and is even hopeful he will be back on the ice soon!

Tony Cozza was in a very unfortunate motorcycle accident on Sunday, June 7, in the early evening hours. He is recovering currently in the hospital with a broken leg, broken rib, broken shoulder blade, and a pretty large wound on his calf. He had his helmet on and has no head injury. During his recovery, even through multiple surgeries, Tony remained in good spirits and full of jokes!

He is doing great and just managing pain at this time. His wife Jenna is by his side daily and showing such strength for Tony in keeping his emotions positive. The medical bills that he and Jenna will be foreseeing are going to be vast, as his medical insurance he just enrolled with was not set to start until July 1st. Those of you that know Tony and Jenna, know they just bought their first home together, and Tony has been working hard to join the South Metro Fire department. Because of this accident they could very possibly be only on one income. Tony recently just sold his garage door business in order to help purchase their home. It is unclear if he will be able to be compensated while he is out of work. Our donation was critical to restoring financial wholeness to this young couple!

A Valuable Member of the Hockey Community

Tony Cozza is described as an “awesome guy” and is a valuable member of the local hockey community. He and his twin brother Mike Cozza play in a couple of adult leagues at the Edge and Ice Ranch (Hatrick Swayze and Old Snacks). Tony has been a participant of the DAWG Bowl and has played on the same ice as some of the DAWG Nation teams. He has played goal at the Edge for many years.

Always Willing to Go Out of Their Way to Help Others

Tony is a really positive and helpful guy, and has helped out his friends and their family numerous times, and deserves some help during this rough patch he is going through. Tony and Jenna are great people. Tony and Jenna are always willing to go out of their way to help others and unfortunately they’re in the position where they need the help. Fortunatley for them, there is always a loving community ready to respond.