Giving Back to Mike McLean 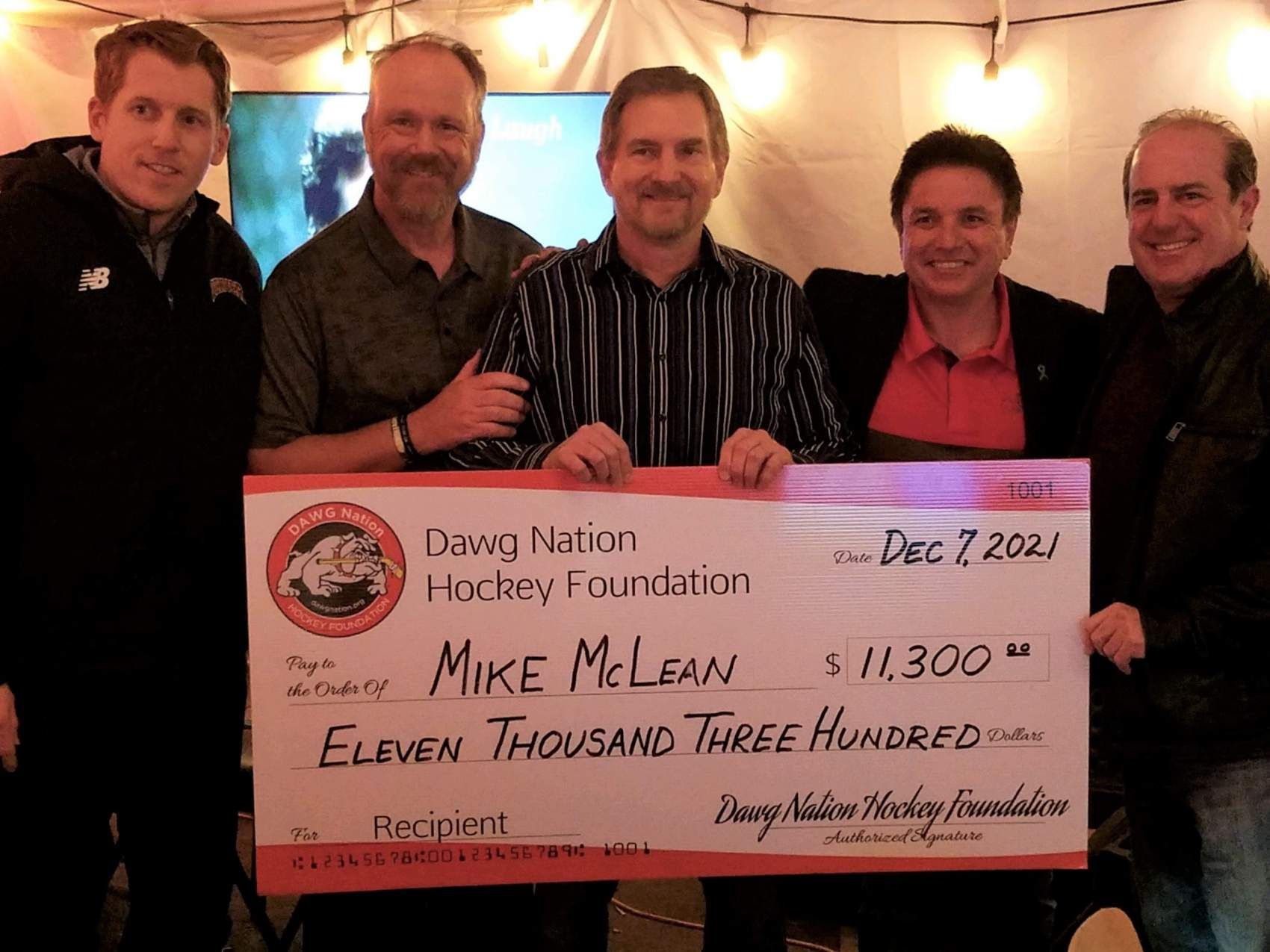 As Mike McLean made his way down to the Campus Lounge, he thought he was going to be a part of a post show panel on Heart Health Awareness after the David Carle Podcast. As the show wrapped up with our own Marty “Cappy” Richardson as a guest of the coach, all eyes turned to Mike McLean. Mike was surrounded by fellow hockey players with differing heart issues that were there to support him. From left to right in the photo below, Patrick Donnelly has an LVAD and is awaiting a heart. Nigel Richardson is recovering from the widow maker with a new heart. Mike McLean of course is in the middle. His nominator, Shawn Leonard also suffered a heart attack. David Carle discovered his heart issues as he was preparing for the NHL. This crew wanted to surround Mike with hope and support.

The surprise didn’t stop there. Mike was perplexed just before the check presentation as his teammates from the over forty league at the Edge started trickling into the tent. He was humbled and excited to catch up with his teammates, soon realizing that they were there to support him! Mike continues to grow stronger day by day and is certainly cherishing life and the many friends and supporters he has, which is no surprise to anyone.

A Hockey Player in a Hockey Family

Mike and his family are longtime fixtures in Colorado hockey and have been involved in the sport since the early 1970’s.  Mike grew up in Littleton playing youth hockey, for Heritage School, and later for the Colorado State University Rams club team.  Mike is one of the original members of the Edge Old Time Hockey League and his brother Steve is also an avid hockey player.  Mike has worn the DAWG Nation jersey having played with the Under DAWGs in the DAWG Bowl where they hoisted the coveted DAWG Bowl trophy as champions of their division in 2017.  Mike and Steve’s dad, “Mac”, was a longtime youth hockey coach. The McLean family has been a big part of the Littleton Hockey youth league.

A Visit from “The Widow Maker”

In June, Mike had a visit from “The Widow Maker”, a massive heart attack that usually has a 97% chance of killing its victims.  Mike’s two main arteries were 100% blocked and he initially died but was brought back to life with God’s Hands, also known as The Paddles.  After spending many days in the ICU, he was slowly brought out of the induced coma he had been put in, a process that was slow due to not knowing how long Mike went without oxygen.

The Road to Recovery

Mike is back home and making progress on the road to recovery.  He is doing well and even joined DAWG Nation as part of the HEART DAWGS at the DAWG Nation Winter Classic. Mike has enjoyed staying connected to these other Survivors and looks forward to playing in the Survivor Game at the DAWG Bowl.