Giving Back to Kevin Miller 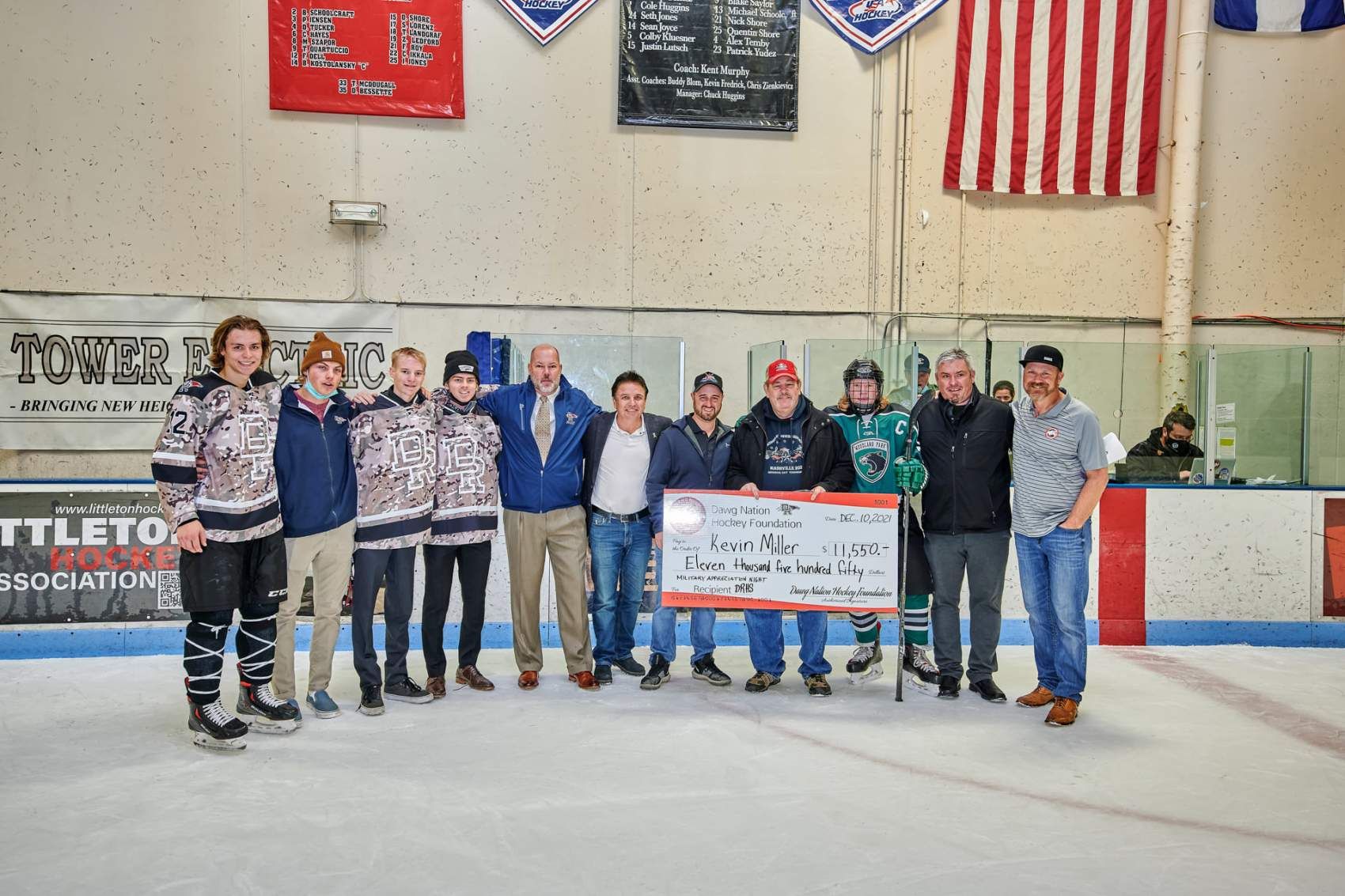 We often try to surprise our recipients, but when Kevin heard that DAWG Nation was partnered with Dakota Ridge Hockey’s Military Night and he was invited, well… the old coach had his suspicions. Kevin was honored to speak to the D-Ridge boys in the locker room. He shared an important message with the boys. No matter what happened during your day, they were here now readying to play one of the greatest games ever- ice hockey. Furthermore, like the veterans they were honoring, they should always be thankful for the opportunity to go out and battle with their brothers! The speech seemed to work as the Dakota boys routed their opponent, the Woodland Park Panthers.

Kevin Miller has a long hockey history in Colorado as both a player and a coach.  He has been a youth hockey coach for Arvada Hockey and the Rocky Mountain RoughRiders for many years and grew up playing for Arvada hockey when it first began over 50 years ago.  Over the years Kevin has coached many local youth players and has had a great impact for the local hockey community around Arvada.  While Kevin is no longer an active youth hockey coach he remains active in hockey playing in men’s leagues at Apex and Promenade ice arenas.

Inspired to Get Back on the Ice

Kevin’s night on the ice with the Dakota Ridge boys inspired him to get back on the ice. He joined the DAWGS and fellow survivors Van Stone (TBI), Nigel Richardson (new heart), and Dave Carr (head on car accident) for a stick and puck. This was a determined group of survivors that keep overcoming hurdles. With oxygen in hand, he was able to get dressed and get out on the ice with the goal of returning to his team, Strange Brew. He met that goal on Jan 23rd and even got off a couple shots.

Kevin was recently hospitalized with severe complications from Covid-19 and was ultimately placed on a ventilator.  At the same time, Kevin’s wife, Lendaria, was also hospitalized with Covid-19.  Fortunately, they both have survived their Covid-19 ordeal and have been able to return home, but the road to full recovery is going to be long and slow.  Kevin is likely going to be unable to work for 4-6 months. With both of them having been in the hospital it has brought some financial hardships due to medical expenses in addition to lost work.

We are also honored to support a proud veteran. Kevin was a United States Air Force Sgt for five and a half years. Kevin enjoys playing in military tournaments, including the Armed Services Memorial Day Hockey Tournament in Nashville.

We are so proud of the D Ridge Hockey team and their commitment to honor our veterans in such a powerful ceremony where they dedicate the time to honor a veteran with every player. Furthermore, D Ridge continued the tradition of Leaving a Legacy through directly supporting Kevin with a donation of $1,500 along with the proceeds of the Pass the Buckets. That generosity ensured that Kevin received the full matching funds approved by our Recipients Committee. Now that is a commitment to our veterans. Go D Ridge! Special thanks to Michelle Search and the Dakota Ridge Hockey program for putting on another first class Military Appreciation night.