Giving Back to Jordan Illian 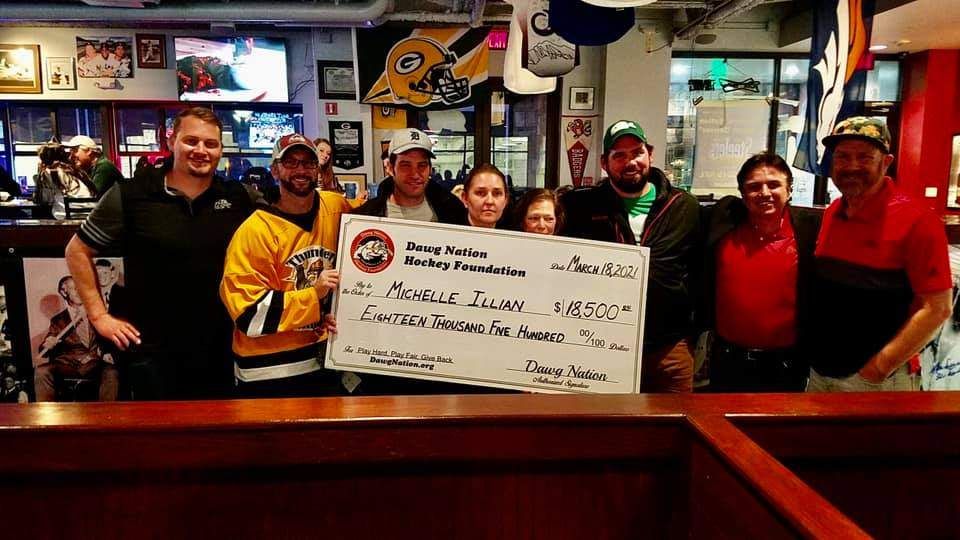 Jordan Illian sadly passed away on February 4th, 2021 due to an unexpected heart attack. We worked hand in hand with his teammates to help out his wife of under 6 months and his family in this time of tragedy and loss. On Thursday March 18th, we presented Jordan Illian’s widow, Michelle, with a check for $18,500. This was an incredibly inspiring night as we had the privilege of helping the Whalers and Thunder Chickens honor their fallen teammate and help support his surviving spouse Michelle. Jordan Illian’s mother was also in attendance as she addressed the crowd with strength and courage.

Jordan’s Jersey Lifted to the Rafters

The night was tearful yet joyful as Jordan’s friends and family celebrated his life and lifted his jersey to the rafters! Special thanks to John Mitchell for joining us. Incredible leadership and show of love by Erik Phillips, Daniel Kirkovich and Joshua Thall! Jordan Illian’s mother helped lifted her son’s jersey while fighting back tears of grief and joy as she appreciated the response of the Hockey community.

“…his personality and charisma on and off the ice touched all of us and he will truly be missed.” – Erik Phillips

A Tribute to Jordan Illian from One of his Many Goaltenders

Simply put, words cannot express the tragedy of Jordan’s passing. He was such a kind, genuine, loving person with a laugh you couldn’t forget. It was quite contagious. It’s been humbling to see how deeply rooted and loved he was within his community. He touched so many people’s lives. I met Jordan through our hockey team three years ago and I feel incredibly lucky to have had his friendship and be his teammate. I’ll never forget his smile or the shots he blocked. He had incredible love not only for the game of hockey, but the people he played with and it showed. Jordan will be seriously missed and I hope that anyone who had the opportunity to meet Jordan, carries on his spirit and brightness. Love the people around you. Cherish the moments we have together.

DAWG Nation worked hard with the Whalers and the Thunder Chickens as they did what they do best and help pass the hat around. This time, the hat was passed around in support of Jordan Illian’s surviving spouse Michelle. Illian’s widow received a check of $18,500 on Thursday, March 18th during a gathering of remembrance and joy.

Jordan will forever be remembered by his loved ones for his personality, passion and kindness.