Giving Back to Bryce Shuck 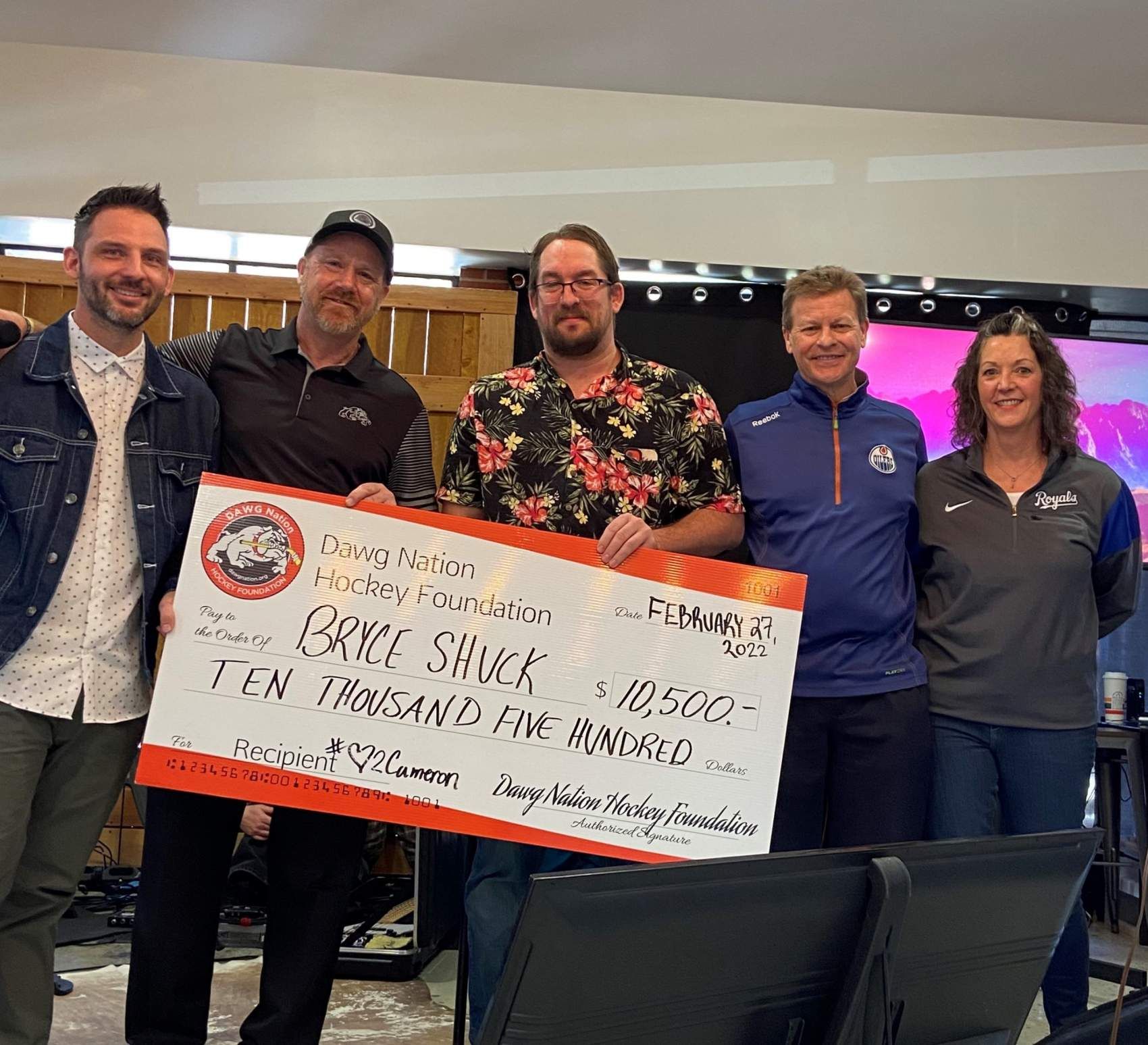 Another day of GIVING BACK for DAWG Nation as we helped Bryce Shuck and his family’s battle with their eleven-year-old son’s diagnosis of Leukemia. His son, Cameron, has a full week of chemo ahead in Edmonton. This Colorado family is posted up a long way from home doing their best to support their son’s recovery!Dave Carr, Bryce’s nominator and dear friend thought it fitting to surprise Bryce after church service with the big check. Bryce was in town for work and wanted to see his church family before heading back up to Edmonton. Mike Freeman, with his son Johnny, nominator Dave Carr and wife Barbara, and Pastor Mitch were able to present the check. The congregation was eager to hear about DAWG Nation and Dave Carr’s incredible journey to recovery. We are thankful to partner with the Shuck’s donors and their church family Galilee Baptist Church – Denver. Thank you, donors and church family, for surrounding the Shucks with love and support!

Bryce, originally from Sangudo, Alberta, is a spiritual man, loving husband to Leanne, and a dedicated and devoted father of three to Parker, Cameron, and Andon.  He and his family adopted Colorado as their home over a decade ago.  As a family, their favorite thing to do is travel the US and catching all the grand sites that God has created.  He and Leanne have ensured such wonderful family memories touring America over the last few summers hoping to see all 50 states before their daughter Parker graduates high school.

A Passion for Hockey

Bryce is an excellent hockey player who began playing at a young age north of Edmonton.  His passion for hockey has never waned through time.  When he arrived in CO, he immediately caught on to a few teams eventually finding a home with Tribal Rites and Mustangs, at the Promenade in Westminster.  He immediately became a leader on and off the ice; for many years leading the league he was playing in scoring.  Bryce has spent many years organizing teams to participate in different tournaments around the area and always welcoming folks even when they had difficulty coming up with the funds.  That is the kind of man and teammate Bryce is:  generous, caring, supportive, humorous, and talented.

On December 2nd, Bryce and his family received some “knee shaking” news.  While his family was back in Canada, their son, Cameron, was diagnosed with Leukemia.  After a battery of tests, Bryce and Leanne heard news that every parent dreads, “the “official” diagnosis turns out to be “B Cell ALL Lymphoblastic Leukemia”.  Cameron immediately went into treatment and he and Leanne have been camped out Stollery Children’s Hospital in Edmonton.

Let’s rally around this Bryce and his family and have the love of the hockey community be felt all the way up in Canada!