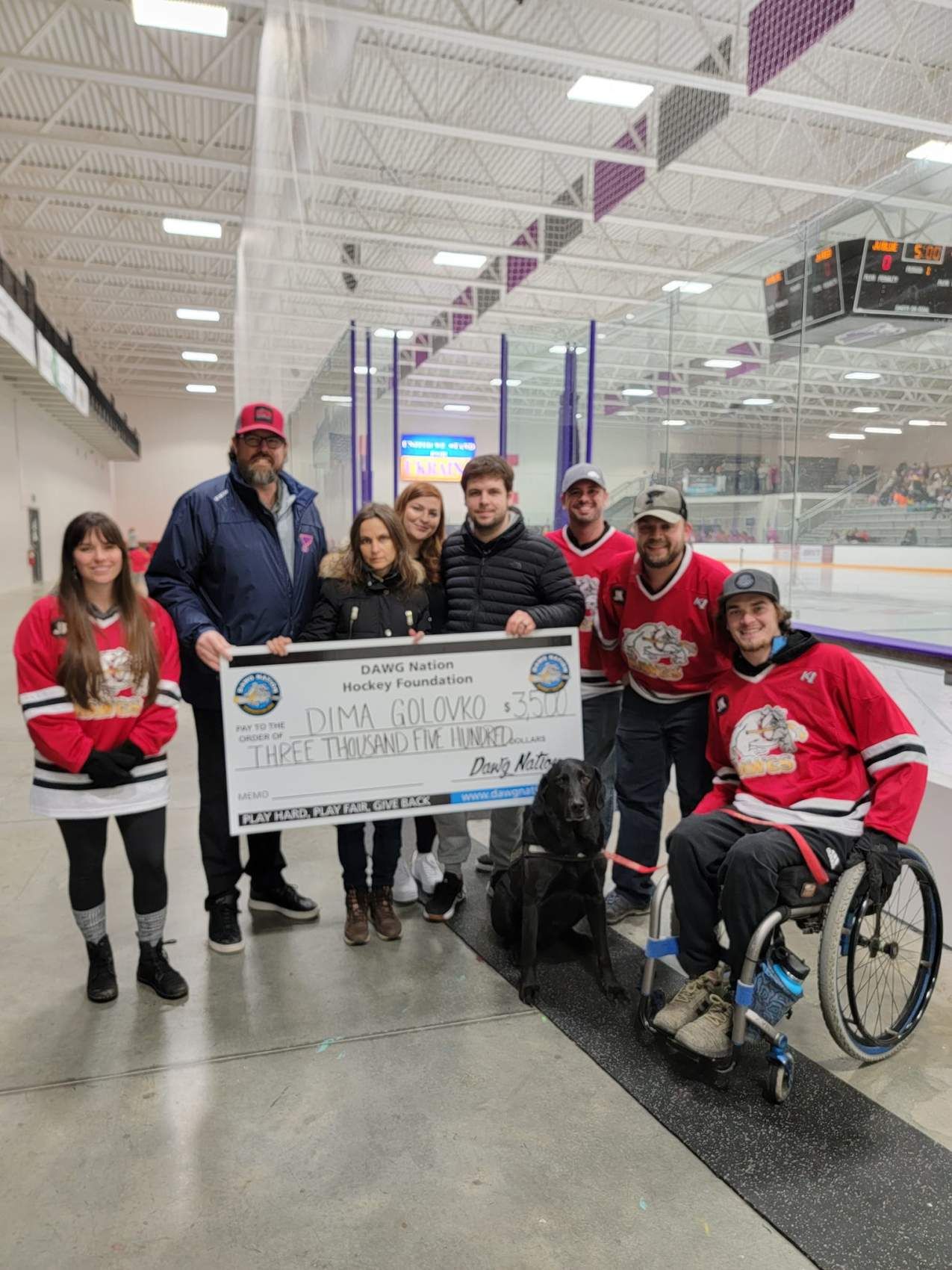 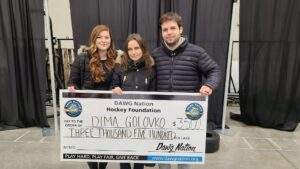 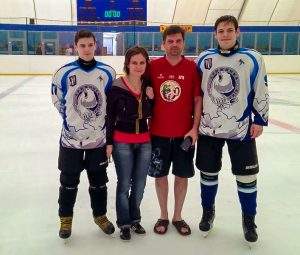 Dawg Nation Hockey Foundation- STL was able to surprise Dima Golovko with a check for $3,500 before the MVCHA All-Star game at the McKendree Metro Rec Plex on March 4. As many of you are aware of the ongoing situation in Ukraine

Dima’s family will face many challenges as the situation there continues to escalate, and the DAWG family stands ready to help in any way they can.

ONE FAMILY AT A TIME

Unfortunately, so many are stuck in Ukraine, but with your help we can help provide for the travel costs and short term emergency needs of this family by helping Dima help his family. While there are so many things unfolding that we can’t control and paralyze us with horror and dismay, we can help Dima.

A UKRAINIAN FAMILY IN CRISIS

Dima’s dad and grandparents are currently living in Ukraine. As we have all seen, Russia has declared war on Ukraine and Dima’s country is currently under attack. His father is stuck there, as no man 18-60 is allowed to leave because of the Marshal Law. His mother attempted to flee Ukraine and successfully made it to Poland after a five hour train ride, walking for nine hours from Lviv to the border and standing on Poland’s border for seven hours. She was picked up by his brother’s friends in Poland and driven three hours to Krakow. In Krakow, his mom’s credit card didn’t work, so a good samartitan paid for her stay in the hotel. She stayed in the hotel for nine hours, and then took the flight to Chicago for ten hours.

Dima and his brother picked her up at 7:45 pm in Chicago on the 28th of February. They got back to Lebanon, IL at 2:00 am on March 1st. What a harrowing journey for Dima’s mother. At this time of course, his parents are not able to work. This is and the travel expenses have created an unexpected financial burden on my family. His dad currently is located in his family home in Ukraine hiding in the basement. His grandparents are doing the same in their house in Ukraine as well. His other grandma is unable to leave the bed and is under the care of a nurse nanny.

HOCKEY BRINGS A NATIVE OF UKRAINE TO THE US

Dmytro (Dima) Golovko is a native of Kyiv, Ukraine. Dima started playing hockey for the local Kyiv club, “HK Kryzhynka” at age of 10 years old. After successfully being drafted as the number one player for special National Ukrainian Hockey Team. In 2014, he came to the US and played for the Hollydell Hurricanes, a AA club team in New Jersey. At the same time, he went to Gloucester Catholic High School, which had both a JV and Varsity team. He played in both.

MOST SEASONS PLAYED IN THE ACHA

After the season was over he moved to Washington State and played for “Compete Hockey Academy”, AAA/Prep level hockey. In 2015, Dima was invited to play in USPHL U-18 Premier in Massachusetts for the Islanders Hockey Club. Finally, In 2016, he started playing for the McKendree University D2 Hockey team. He just finished playing for them two weeks after his senior night. Dima played for six years for Mckendree University, for which he holds the record for the most seasons ever played in ACHA.

FROM PLAYING TO COACHING

Dima coaches many kids from the local hockey club “Southern Illinois Icehawks”. He is also included in many learn to skate programs, learn to play, power skating, and hockey skills programs. In addition, he is currently an assistant coach to the O’Fallon Varsity High School team. As if this weren’t enough, this young man is also in charge of MVCHA (the Mckendree Metro Rec Plex) and he runs the Grumpy Old Man league and Mid-America Hockey League at the McKendree Metro Rec Plex. Of course school is a high priority as well and DIma will finish his MBA in Corporate Financing in May.

Learn more about Dima through his McKendree Senior Night Video